Alkaline Plant Based Diet » Alkaline » All About Alkaline Chayote Squash

All About Alkaline Chayote Squash

Chayote is an alkaline edible plant whose roots, stems, leaves, seeds are eaten, but most of all people eat the fruit of the chayote plant.

The chayote plant’s alkaline fruit is called chayote squash, but it is really not a squash. Chayote squash does belong to the same gourd family, Cucurbitaceae, as squash, melons, and cucumbers.

Chayote’s botanical name is Sechium edule and research[1] has indicate chayote was native to Mexico and due to its popularity was spread by Europeans throughout Central America, South America, the Caribbean, and was brought to Europe during the European conquest.

Due to chayote’s popularity it spread throughout the world and as a result took on many different names. Chayote spread to Europe and chayote in English became known as vegetable pear and pear squash, while it become known as mirliton in North America. 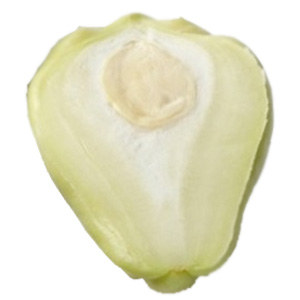 The Chayote squash has a pale green skin and a pear-like shape, and as a result was called a vegetable pear in English.

Chayote is eaten as a vegetable and inside its pale green skin is a crisp creamy white flesh with a large white edible seed in the middle.

While the main attention is put un the inviting taste of the flesh of the chayote, the skin is nutritious and can be eaten as well and most of all don’t overlook the seed that is a treat in itself.

Chayote is high in fiber which protects against the development of a hiatus hernia and acid reflux. It feeds the good bacteria (immune system) in the colon and protects against colon diseases like colon cancer.

Chayote leaves and fruits contain phytonutrients that are supportive of cardio vascular health and anti-inflammatory properties.[10]

The leaves and fruit have diuretic properties and have been used in traditional medicine to relieve urine retention, and burning during urination.

In addition, they have also been used to treat arteriosclerosis, hypertension, and kidney disorders. 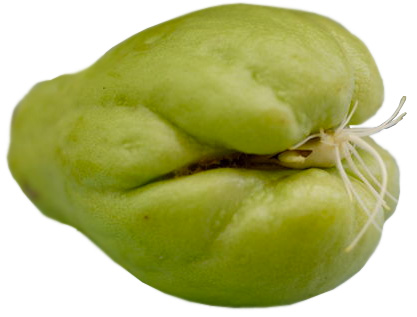 The whole chayote fruit is used as a seed to grow the chayote plant, which is pretty fascinating.

When starting to grow a chayote plant pick a mature chayote squash, because it will give the seed a better chance to sprout.

After choosing a mature chayote, put the squash in a plastic bag a loosely wrap it up.

Depending on the maturity of the seed and the temperature germination my take weeks, so you may need to have patience with it sprouting.

Once the chayote develops a sprout plant the chayote in a pot with loose and moist dirt, and leave the top of the chayote uncovered.

The chayote squash contains a lot of water and nutrients to feed the seed, so don’t water the plant too much because it can make it rot.

Once the chayote plant grows, with proper pruning, one seed can develop into plant that can produce between 50 and 100 chayote squash.

View the video to see the sprouting of a chayote seed, the development of the plant, and the plant’s productions of many chayote squash. 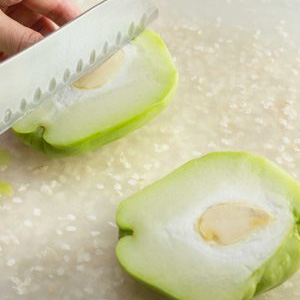 The chayote squash doesn’t have to be peeled, and can be eaten raw.

My favorite way of eating chayote is to boil it in water, and you don’t need to remove the skin because it is edible.

When eating chayote either raw or cooked, make sure to give it a good wash to remove any remaining dirt or contamination from its handing.

Slice the chayote into 4 equal pieces, and add the chayote to a pot with enough water to cover it. Turn to fire to high and bring the water to a boil.

After the water has started to boil, reduce the heat to a medium fire and let the chayote cook for 10-15 minutes.

You want the chayote to soften, yet you don’t want it to become too soft where it loses its crispiness.

Test the chayote as it cooks by sticking it with a long fork so your hand doesn’t get close to the hot water.

The chayote is ready when the fork can penetrate it while there is still some resistance. If the fork goes in easily the chayote is overcooked.

Remove the chayote from the water, plate it, and season it. I like the boiled chayote with a little sea salt, a sprinkle of cayenne pepper, and a drizzle of coconut oil.

In addition to boiling the chayote, it can be baked, fried, mashed, stuffed, or made into a soup.

Where to Buy Chayote Squash

Chayote is popular in many Spanish dishes, so it shouldn’t be too difficult to find chayote in supermarkets and bodegas in Spanish and Mexican neighborhoods.